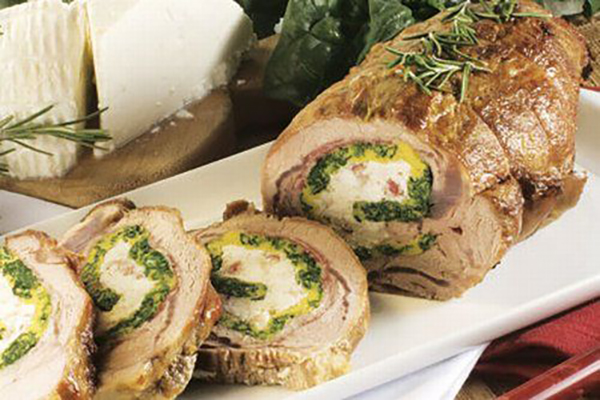 Method:
Wash the spinach and boil with a little water left over from washing it, squeeze and cook in a frying pan with 20 g of butter, 60 g of Parmesan cheese and a pinch of salt. Prepare an omelet with eggs, the rest of the Parmesan and butter, a pinch of salt. Thinly slice the bacon. Dice the ginger. On an ovenproof plate flatten the veal then cover with the slices of bacon and the omelette, put the spinach on top, leaving a wide enough edge so the filling doesn’t come out. Roll the steak and sew together with a large needle and a colourless thread, making sure the filling doesn’t escape. Tie it up with kitchen string, Place the meat into a pan that is just the right size to hold it, add salt and pepper to taste, then add the Ginger oil, sauté gently until a golden crust has formed. Add a cup of water, cover so the pan is sealed and simmer for about 1 hour. Serve the roast cut into big chunks, either hot or cold.